And it has been fan-fucking-tastic. 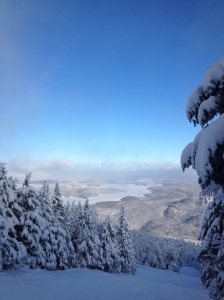 And it just kept coming. Click any image for a larger view.

Out in Tahoe, they’re dealing with a New England winter. In New England, we’re finally getting what the old paw-paws remember from their childhoods.

Three weeks ago I sat down to write an update, but it’s just kept coming. Between the other stuff, class, work, schelping back and forth to CT every week…I’m kinda behind.   Catch you up:

Things have been a bit nuts.

After a few weeks of simply brutal cold, we have been rewarded with the kind of light, blower powder that you used to have to get on a plane to go find. The ski world is actually kind of small, and the word (if you don’t believe the Weather Channel – and really, why should you?) is that Vermont and New England in general has absolutely the best snow in the country right now. “As if the natural world’s been turned upside-down” (Lord Mandrake). 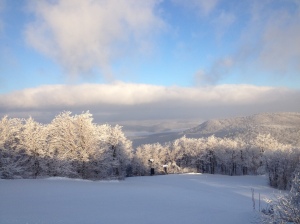 Better than Utah, Colorado, Montana, the PNW, BC (they’re part of my country), and most definitely and without question, better than California.

The time since my last post has seen plenty of mornings but few photos. Initially, because it was so cold. Now it’s more because I’m too busy skiing. Also, it’s hard to really communicate with iPhone snaps the difference between trees coated with high-moisture eastern concrete and trees coated with smoke-light, dust-dry powder – at least it’s too hard for me to bother to try when I could be skiing it instead.

There isn’t a day of this wonderland skiing that goes by without my thinking of my father and our few trips to Mohawk Mountain in northwest Connecticut to try to ski when I was young. There are some memories that simply stay with you. They persist, but they also morph and blend with others and become a kind of amalgam of fact that has more of truth to it than actuality. 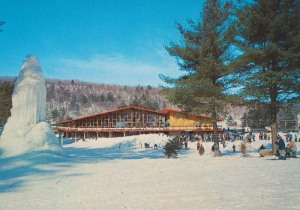 Mohawk, as it was in 1960, 1980, and today. Those familiar with the hill where I work will notice some historical similarities. They are not coincidental.

I remember getting up early in the dark, and packing peanut butter and jelly sandwiches (wheat) and apples into an old green Eastpak backpack. Hand-me-down or yard-sale skis in the car; leather or leather-and-plastic boots, spring-pin bindings. These were the trips before that incredible Christmas that yielded new skis, new bindings, new boots – all of which failed to magically confer skiing upon me.

Gear, I once thought, would do for me what God had failed to do. Not so. Anyway, not that gear.

(For the record: Olin 871, 191cm in dismal graphite; Salomon 747s, and Dolomite rear-entry boots, red and white, with the fit-adjust dial on the instep. I really wish I still had this set-up.)

We drove north in the dark. Trips over two hours felt like journeys to me. Mohawk was just far enough to feel far. The snow would skitter across Route 8, spinning wraith-like skeins in our headlights.

The lodge unchanged (and still unchanged) from the 50’s, we stored our gear in open cubbies. I balked. “It will be fine,” said Dad. “No one will touch it – everyone’s a skier here.” Amazing, I thought. And it was. And is.

We proceeded to the hill and I commenced to fall, and later to weep with frustration.

This is all a part of my personal mythology. I know I cried. I know I failed to execute a decent turn. I honestly don’t recall how many times we went. I only know that this happened, and that it traumatized me so much that it shows up in all my memories and memoirs of skiing. 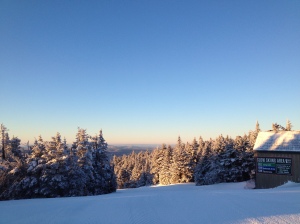 On these beautiful powder days, I think about those wrecks and struggles. And I think, “I wish you could see this, Dad. I wish you were here. Look! I’ve got this – I’m better than I was, even better than you were. Aren’t you psyched?” It’s good finally to be good.

Mostly, though, I know it’s the snow’s fault. I don’t suffer any illusions about the level of my ability.  But I love snow that makes you look good – that leads your buddy to say, “Following you down the Boonies, it didn’t look real. It looked like…footage.”*

There are plenty of ways to remind yourself of your limits, of course. And what nature doesn’t provide, I am happy to introduce on my own initiative. The moment when you think you’ve got things under control is usually the instant reality corrects your misperception.

I hadn’t been down Gulch within a few weeks. Taking the toboggan down to the call, I was moving pretty good when the ground basically went away. I was in the air for a while – at least a little longer than I thought I would be.

The sled landed first.  Where at first we had been partners in flight, I was abruptly tethered to a sea-anchor.  The sudden loss of momentum pulled me into the backseat, so I landed on the tails of my skis, and then my back, and then my head.

The first — and the second — thing they tell you in toboggan training is to never let go of the handles, so I hadn’t.  That drove them into the ground when I hit, flipping the sled up into the air behind me. I actually landed well, all things considered. My skis didn’t come off and I slid to a stop on my hip. I had to unclick to hustle up the hill to retrieve the toboggan.

If you watched the Super Bowl, you saw Julian Edelman take a wicked shot from a defensive back that certainly rattled his squash. Nevertheless, he oriented himself down-field and ran a few more yards. I was much the same. It was only later, after I’d returned to the summit, that I felt less than myself. Not nauseous, exactly, but not right. Much less right, in fact, than I was aware.

I owe Billy C. for being the guy to put a hand on me and say, “Hang on. Let’s just see how you really are. Slow down. And, by the way, slow down.”

For my genius, I was rewarded with a softball-sized hematoma above my buttcrack and a concussion, symptoms of which subsided overnight. They say the effects of such jostling are cumulative, so if you add up the combined effects of eight years of football, six years of wrestling, and five years of rugby, as well as accumulated insults from childhood, skiing, motorcycle wrecks, and car accidents, I’d say, cumulatively, there will be some effect.

Neatly, that’s the second sled I’ve crashed in as many years. I had been thinking about applying for the senior patroller program that NSP runs. You need a letter of recommendation from your patrol director and I figure I should try to make it through a whole season without wrecking a sled before I ask for such a thing. 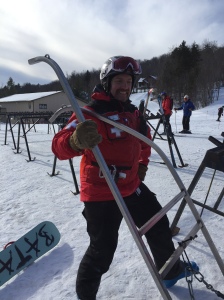 The rueful smile captured in the immediate aftermath. The fellas are always ready to immortalize your competence. We got the sled down to the code; Carl was able to board him down without trouble (not far). Bill took the photo and it was quickly circulated. Yay technology!

The snow couldn’t have come at a more opportune time.

Much more to come — including the search for a lost skier and other glories of patrolling.

A view that will not age.

*Aaron said that after the first real day of super-light powder. It’s come back since, but that day we were all just shocked to see it. Legitimate face-shots making turns on Ripcord; unheard of. 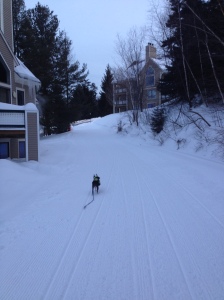 Until next time, happy trails…